News from the DNC (Democratic National Committee) and ASDC (Association of State Democratic Chairs), among others, will be shared here.

“A quarter of a million Americans have perished because of this pandemic. A quarter of a million lives have been taken by this administration’s inaction, incompetence, and cruelty. That’s one of the reasons the American people decided to elect new leadership to the White House. Joe Biden and Kamala Harris will put the health and safety of the American people first. In fact, President-elect Biden has already appointed a COVID-19 task force led by public health experts to tackle this crisis and save lives. With daily cases at an all-time high and millions still out of work, we need bold leadership to stem the tide, coordinate the swift and widespread delivery of a vaccine, revive our economy, and finally end this pandemic once and for all. It’s time for action. It’s time to build back better.”

MESSAGE OF THE DAY

3. Trump’s Legal ‘Strategy’ Is a Failure

MESSAGE OF THE DAY

3. Trump’s Legal ‘Strategy’ Is a Failure

Celebrate a Democratic Victory with DMO

The DMO "Oh So Blue" event is legendary. We come together twice a year to celebrate the work of you, our Democratic municipal officials, and hear from the best minds and hearts of the Democratic Party. DMO has featured Cabinet Members, Senators, Members of Congress, and even future Presidents at our podium, and this year we hope to see you as well.

This November’s "Oh So Blue" Celebration comes as a virtual version of our traditional national breakfast meeting, held during the National League of Cities. While we regret not being able to see you in person, you can expect the same phenomenal guest speakers, awards, and opportunity to connect with your friends in elected office. All this from the comfort of your home, and you won’t need to wake up early to save a seat!

Our Celebration this November is a fully interactive event. Hop from table to table, meeting with other local elected Democrats from your state and across the nation. 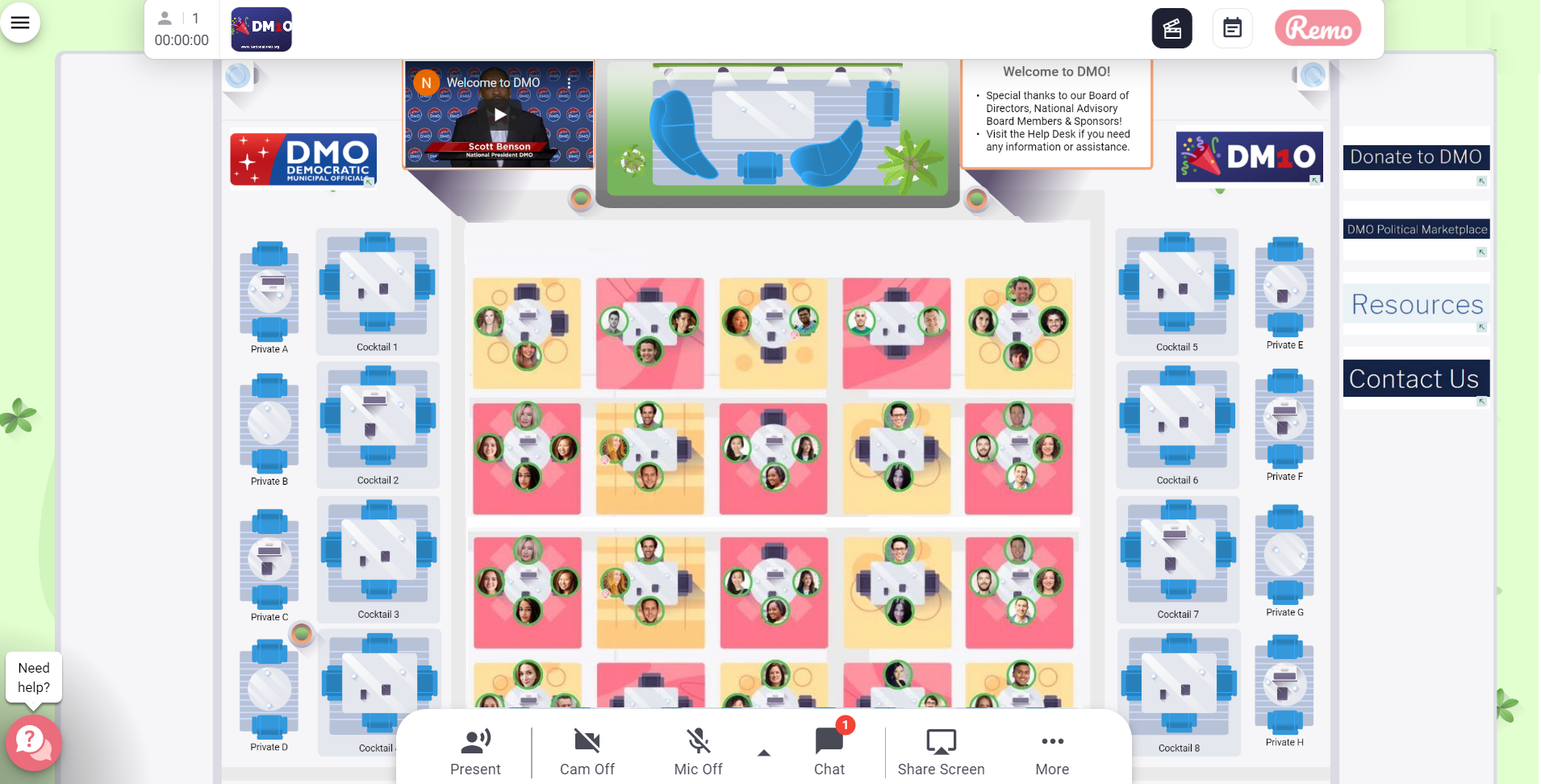 Remo allows attendees to virtually join a "table" and work the room.

Come WORK THE ROOM! Mix and mingle with Democratic Municipal Officials at our "Oh So Blue" Celebration. Join us for a unique and fun online event where you are in control of who you spend time with – just like at a live event. Hop from “table” to “table”, arrange one-on-one conversations, and visit with friends old and new. We will have VIP guests mingling – not “speaking at you” but conversing with you.

Register for the "Oh So Blue" Celebration

Visit DMO in the National League of Cities' virtual exhibit hall. Chat with our Board, participate in group discussions, and pick up some digital swag!

A new report confirms this election was fair, free, and secure. Trump and his Republican sycophants have no evidence for their claims — even other Republicans admit they are inventing conspiracy theories. Trump can’t hide from the truth: Joe Biden won the election and will be the 46th president of the United States.

New York Times: The Times Called Officials in Every State: No Evidence of Voter Fraud

Election officials in dozens of states representing both political parties said that there was no evidence that fraud or other irregularities played a role in the outcome of the presidential race, amounting to a forceful rebuke of President Trump’s portrait of a fraudulent election.

Over the last several days, the president, members of his administration, congressional Republicans and right wing allies have put forth the false claim that the election was stolen from President Trump and have refused to accept results that showed Joseph R. Biden Jr. as the winner.

But top election officials across the country said in interviews and statements that the process had been a remarkable success despite record turnout and the complications of a dangerous pandemic.

“There’s a great human capacity for inventing things that aren’t true about elections,” said Frank LaRose, a Republican who serves as Ohio’s secretary of state. “The conspiracy theories and rumors and all those things run rampant. For some reason, elections breed that type of mythology.”

Steve Simon, a Democrat who is Minnesota’s secretary of state, said: “I don’t know of a single case where someone argued that a vote counted when it shouldn’t have or didn’t count when it should. There was no fraud.”

“Kansas did not experience any widespread, systematic issues with voter fraud, intimidation, irregularities or voting problems,” a spokeswoman for Scott Schwab, the Republican secretary of state in Kansas, said in an email Tuesday. “We are very pleased with how the election has gone up to this point.”

The New York Times contacted the offices of the top election officials in every state on Monday and Tuesday to ask whether they suspected or had evidence of illegal voting. Officials in 45 states responded directly to The Times. For four of the remaining states, The Times spoke to other statewide officials or found public comments from secretaries of state; none reported any major voting issues.

One of the Secretaries of State who did not respond to requests for comment about the election in his state was Corey Stapleton of Montana, an outgoing Republican. But Mr. Stapleton did post a message implicitly addressing the president’s ongoing fraud claims. “I have supported you, Mr. President,” he wrote. “But that time is now over! Tip your hat, bite your lip, and congratulate @JoeBiden.”